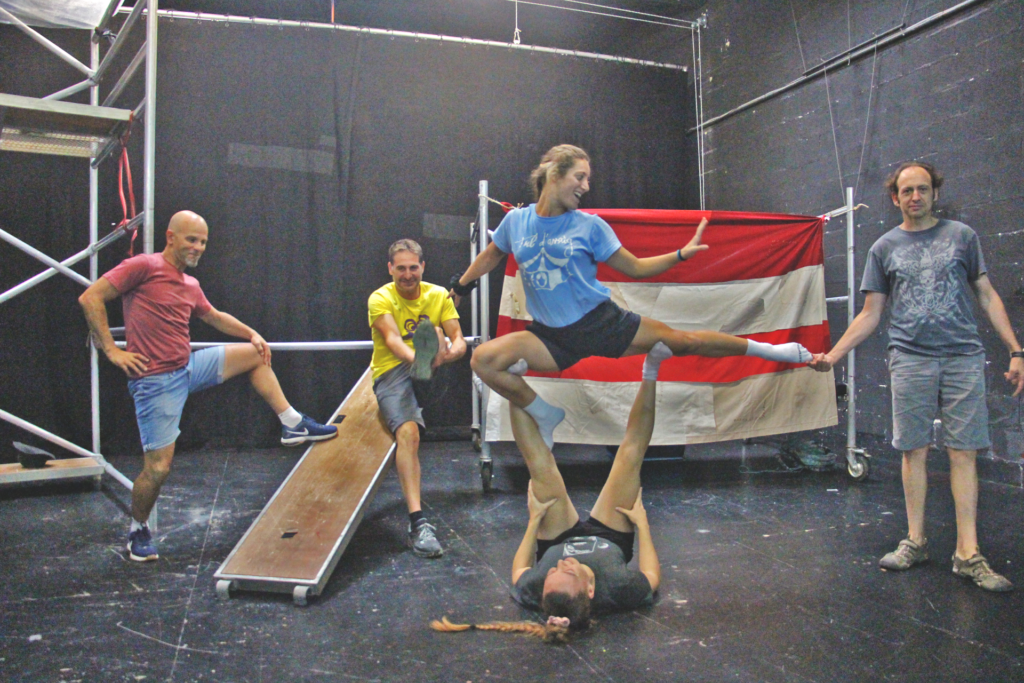 La Baldufa is preparing for the first time a circus show, which will premiere in July 2023 at the Esbaiola't Festival.

The company will be in charge of the direction and dramaturgy, while on stage we will be able to see the duo Laiaiona, two circus artists who will assume the interpretative part.

In the 26 years of the company, La Baldufa has been, fundamentally, on stage. From the first production, "Para reír?... 3 Cerditos en la playa!", to the last one, "ImPERFECT", Enric Blasi, Emiliano Pardo and Carles Pijuan have been authors, co-directors and performers, a role that in this new creation they cede to the duo Laiaiona. For the first time, then, it will not be the 3 creators of La Baldufa who will perform, but they will focus on the role of directors, creating collectively with two circus artists with long experience despite their youth: Ona Vives and Laia Gómez.

Last May, the creative process began for the new show, which still has no name, and which, for the first time in the company's history, will be a circus show. "Circus has always been very present in our lives, and we have shared stages with outstanding circus projects and artists, a discipline that is gaining presence and that has more and more heterogeneous proposals, very interesting at a conceptual and dramaturgical level" explains Carles Pijuan, one of the directors. "The circus has its own codes and we will try to respect them as much as possible, while contributing all our dreamlike and narrative universe," he adds.

It will also be the first time that the company will not be on stage, but will be in charge of the direction, the creation of the scenic space and the dramaturgy of the show, leaving the interpretative part to the duo Laiaiona, two multifaceted circus artists, but specialized mainly in acrobatics. "We have always been very clear about the need to have, in each of our creative journeys, a person to do the stage direction, to order the creation made collectively. This figure of direction is in charge of ordering and polishing all the creative material generated collectively" says Emiliano Pardo, another member of La Baldufa. And the other director, Enric Blasi, adds: "We have worked with great professionals such as Jorge Picó, Jokin Oregi, Ramon Molins and Sol Picó, among others, and from all of them we have learned something that we will now try to apply to this new project".

The duo Laiaiona fits perfectly in this new project. Ona Vives (Cornellà de Llobregat, 1997) and Laia Gómez (Hospitalet de Llobregat, 1997) met at the Rogelio Rivel School and also studied together at the University of Circus Arts CODARTS in Rotterdam. They are specialized in acrobatic portés and Icarian games, an ancient discipline of the circus arts consisting of human juggling, which has practically disappeared. Laiaiona performed in the last edition of Esbaiola't in the show "Les Encantades", in the middle of nature.

La Baldufa discovered this duo in the show Nuye de Circ "Eia". "We were captivated by their solidity when performing acrobatics, their stage presence and their theatrical play", summarizes Blasi. From the circus game in which Laiaiona are specialized, the show will talk about contemporary social situations and conflicts. A creation process that, as in all of La Baldufa's shows, will be articulated through creative complicities. "Our work is always based on the sum of all the intelligences involved in the project and the contribution that each one makes. We always work on the basis of collectivity," says Emiliano Pardo.

The result of all this will be a theatrical and contemporary circus street show, for all audiences, which can be seen for the first time at the next Esbaiola't Festival, in Esterri d'Àneu, in July 2023.