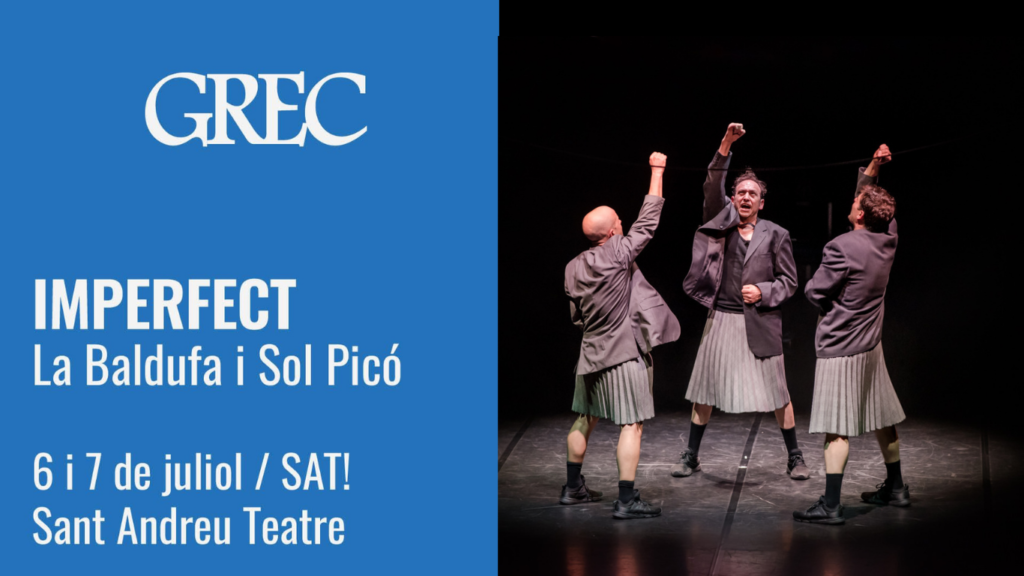 Next week we will participate in the GREC Festival with our show ImPERFECT! The performances will be on 6 and 7 July 2022, at 18.30h, at the Sant Andreu Teatre - SAT.

We are very happy to be able to present ImPERFECT at the Grec Festival -which is also co-producer of the show-, and that they are betting on "unconventional", investigative and contemporary family theatre.

ImPERFECT is about imperfections, second chances and the right to reinvent oneself. After 25 years on stage doing family shows, in this new adventure we have put ourselves under the orders of Sol Picó to get out of our comfort zone and create a dance show, a completely new language for us.

And why? Well, because at La Baldufa we are motivated by the mixture, by stage crossbreeding, by unconventional creation. We have always felt a great attraction for experimenting with new languages, outside the established canons and, obviously, for challenges. And on this occasion, it has been a challenge in capital letters.

And we have done it in the best company, with Sol Picó, one of the most renowned and heterodox artists in contemporary dance. Her creations are pure mixture. Multidisciplinary, transgressive, determined to cross and overcome the barriers of stage languages. We could not have embarked on this adventure with anyone better. We have had an absolute artistic and personal connection with her, we have enjoyed the process very much and we believe that this shows in the final result.

Imperfect was co-produced by Mostra Igualada, Festival GREC, Festi'Mômes, Questembert Communauté and LaSala - Centre de Creació d'Arts per a les famílies. It has also had the collaboration of Teatro Cánovas in Málaga, Festival Sismògraf in Olot, Teatre Municipal de l'Escorxador in Lleida and Sant Andreu Teatre - SAT, in Barcelona.

We think that the result is an aesthetically powerful and suggestive show. An interesting journey with points of emotion and with a great aesthetic and dramatic force. We also want to invite you to move your body and use dance as a tool of expression, as we believe it is very powerful. What do you think? Are you up for it?